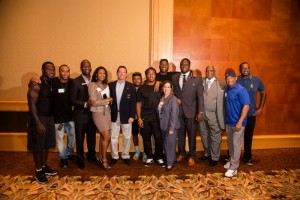 General Manager Ed Walls welcomed everyone, noting that in October they transitioned to Curio, a brand supported by Hilton. “The Diplomat has been one of those iconic hotels that have been around South Florida since the 50’s. With an amazing history, we are able to build on a blank canvas to re-create The Diplomat with a nod to the past mixed in with a contemporary feel.”

“Over the next 18 months, Thayer, a private hotel investment group based in Annapolis, Md., has planned a $100 million renovation. They are going to re-design the guestrooms, pool area and landscaping while re-energizing the lobby area. They will also bring in great talent in the restaurant arena by opening two new restaurants and renovating the others.

“By 2016, the hotel is going to reposition itself to be a wholesome version of South Beach. We’re looking forward to being good neighbors with Aventura and Hollywood, so stay tuned!”

Special recognition was given to The Diplomat team for helping organize the luncheon: Kelbert Fleming, Director of Events & Catering and Marcy Diaz, Director of Catering.

Special appreciation was expressed to Aventura Mayor Enid Weisman for speaking from the heart about each player and their high school football coach, “Coach Luke”, Luther Campbell. Floyd Raglin of Warren Henry Automotive, was also recognized for helping athletes make great strides off the field.

Serving as MVP emcee, Campbell asked the athletes, “What motivates you to want to give back?”

Eskridge said, “We’re motivated by the kids in our community and being able to help change their lives. It’s about letting them know dreams can come true if you try to work harder than the next person and give all you can give – 110 percent!”

Bailey noted, “Growing up, I had role models who gave me advice, motivation and hope that there’s a way out. Now, I want to do the same for kids and help them understand that even a successful sports career won’t last forever. They have to focus on getting a good education and have a plan B.”

Shipman, founder of the ChampionShips Youth Organization, emphasized his commitment to using his sports career as a platform to help inspire kids. ChampionShips creates “opportunities to broaden the mindset of young athletes by empowering them with advanced programming in education, professional development and mentoring to help them achieve their dreams.”

Freeman established the Devonta Freeman Foundation to facilitate his goal to “give back, and help reach out to kids growing up in rough neighborhoods.” The Foundation’s first annual Youth Football/Cheer camp held in June at Charles Hadley Park was super successful thanks to a great turnout of volunteers, sponsors and involved parents.

Another event highlight was when Kristin Campbell’s husband, Luther Campbell, made a special appearance. He co-founded Liberty City Optimists, an inner-city youth sports program, and has served on the coaching staff for Miami-Dade public high schools. “Coach Luke” has coached many young football players on and off the field, helping to change their lives and stay focused on their goals.

Before the two- minute warning, everyone was encouraged to support what NFL players are doing to “give back and help make the community a better place.”